In this article, we will provide you with information about top 10 residential neighborhoods in Greater Cairo, their features, prices and location, as many would prefer to live in traditional Cairo neighborhoods than compounds, due to their proximity to their work.

Greater Cairo is one of the most populated governorates in Egypt, with a population of approximately 25 million people, and it has the most famous roads, bridges, monuments, and numerous facilities. Also, the area of ​​urban space in Greater Cairo has been expanded, as several new cities were built and became already populated by residents and commercial projects, including: “Fifth Settlement, El Shorouk, Madinaty, Al Nozha El Gadida, Al Rehab, New Administrative Capital, and others”.

10 neighborhoods in Greater Cairo are suitable for your budget

10th of Ramadan is one of the biggest industrial cities of Egypt, located in El Sharqia Governorate specifically on the Cairo-Ismailia Desert Highway. The City is beautifully designed and perfect for residents; you’ll find yourself surrounded by green areas, well laid out streets, many schools, and medical services along with several compounds like Fontana. Prices in 10th of Ramadan are fairly economic, with an average price of EGP 2,700 for apartments and EGP 9,700 for villas.

Among the most important monuments are: Sidnawy, El Ordoneya District, El Rowad Sporting Club, and Engineers Syndicate Club, and it can be easily reached from Cairo-Ismailia Desert Road, or through Belbeis Desert Road.

Faisal is one of the largest residential neighborhoods in Giza. It is located next to Haram and it has recently morphed to become of the biggest residential neighborhoods and most populated areas in Greater Cairo. It is characterized by the availability of all services and facilities, as well as commercial stores, in addition to the diversity of its services, while severe traffic congestion is one of its disadvantages.

Also, the average price per square meter of villa is EGP 2,100, and its most important landmarks are: “Radio and Television – Faisal Street – 20th Street”, and can be easily accessed via Cairo Metro, the Ring Road, or Al Haram Street. 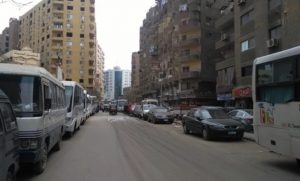 It was named after the Giza pyramids and located inside Giza governorate.  Al Haram and surrounding areas make it one of the largest neighborhoods in Greater Cairo. Al Haram is known for the availability of schools, and health and commercial services. One of its main disadvantages is severe traffic congestion. The living levels of the population inside the neighborhood vary between “high-end – middle – popular”.

It is considered one of the oldest neighborhoods in Greater Cairo and it is divided into several ancient neighborhoods, such as Attaba, Abdeen, Bab Al-Luq, and others. The neighborhood is located in the middle of Cairo, and it is characterized by “good planning of streets – the European style in buildings – the cultural sophistication of the population – commercial activity – and the provision of all services”.

The average price per square meter starts from EGP 4,300 for apartments. Also, one of its main disadvantages is the severe traffic congestion, and a large number of cafes, which causes noise to the residents of the neighborhood.

Its most famous features are: “Tahrir Square, Egyptian Museum, Ministry of Interior, Talaat Harb Square, and American University in Cairo”. Moreover, it can be reached via “Cairo Metro”, Ramses Street, or many other streets.

The city of Obour is located in the northeast of Cairo, on an area of 16.2 thousand feddans. It is one of the cities divided efficiently, as it was divided mainly into industrial, residential, service and agricultural areas. The industrial zones are separate from the residential areas. However, they are also near in order to facilitate the smooth movement of workers from the factories. Its main features are “good planning, parks and gardens, availability of sports clubs, tranquility, and Souq Al Obour”, while its disadvantages are being located so far from Cairo’s Downtown, and the low number of services.

The city possesses real estate that suits all tastes and economic levels among its neighborhoods, where you can buy an economic, medium, above average, or even luxury property.

The average price per square meter in this area starts from EGP 4,300 for apartments and EGP 9,500 for villas. The most prominent landmarks of the city are: “Geroland Amusement Park, Souq Al Obour, and Orabi Association”.

The city spans over 12,000 feddans at kilo 37 of “Cairo-Ismailia” Road. Its features are “the large number of green areas, tranquility, and distinctive urban planning”, while its disadvantages are “low number of population density, unpaved roads, and the lack of lighting at night”.

Moreover, the average price per square meter in this city starts from EGP 4,600 for apartments, and EGP 11,350 for villas. It can be easily reached through two roads: “Cairo – Ismailia” Road or “Cairo – Suez” Road. Finally, its most famous landmarks are: “Heliopolis Sports Club, the British University, and the French University”.

El Hadaba El Wosta is of Mokattam new neighborhoods, it was mostly built recently, and it is located between Mokattam Mountain and Maadi Ring Road. This neighborhood is one of the fastest developing areas in Cairo given its proximity from the center of Cairo and its moderate prices. El Hadaba El Wosta has a truly strategic location between the middle between Giza and New Cairo, and it has direct access to most of the key neighborhoods in Cairo. One of the disadvantages of the area is that it has many streets remain unpaved and there are limited services in some neighborhoods. El Hadaba El Wosta offers mostly middle and upper-middle housing units. The most famous landmarks include: Shooting Club, MTI University, Carrefour Maadi, and Modern Academy. The neighborhood can be easily accessed via Mokkatam, Ring Road, and Autostrad, and it is accessible from New Maadi, New Cairo and Nasr city.

The average price per square meter in this area starts from EGP 5,000 for apartments.

New Cairo is located east of Greater Cairo, and the Fifth Settlement is one of its largest neighborhoods. It has several advantages, such as: «the width of its streets, tranquility, the low number of population density, and the availability of many private schools and universities», and its disadvantages are: “the high prices of housing units, and having some unpaved streets.”

Moreover, the average price per square meter in this neighborhood starts from EGP 8,850 for apartments, and EGP 17,250 for Villas, and it can be easily reached via the Ring Road and several other roads.

The neighborhood is located in Giza Governorate between several streets, namely: «League of Arab States street, Sudan Street, El Batal Ahmed Abdel Aziz Street, Agricultural Museum Street, Nile Street, and Abdel Salam Aref Street». One of its advantages is the availability of many services, and its disadvantage is the severe traffic congestion.

The average price per square meter starts from EGP 9,900 for apartments, and EGP 13,000 for villas, and it can be reached via “Cairo Metro” or Tahrir Street.

It is located north of Al-Rhoda Island, which is an island in the Nile River between Cairo and Giza. The district is considered one of the most prestigious and oldest neighborhoods in Greater Cairo. It has several advantages, such as: “sophistication, tranquility, moderate atmosphere, and monuments”, while its landmarks are: “Manasterly Palace, Umm Kulthum Museum, Manial Palace Musuem, and Kasr El Aini Hospital.

Moreover, the average price per square meter starts from EGP 10,650 for apartments.

* It is worth mentioning that real estate prices are always changing, and we are keen on Aqarmap to update the price list of neighborhoods to keep the consumer informed about the changes in the real estate market. We also measure the demand indicators through Aqarmap index.

Your Guide to Compounds in Smouha

Find your suitable apartment for renting in 1st Settlement

Reasons to buy a property in New Administrative Capital

All you need to know about New Administrative Capital