The Sixth District in the western Nasr City neighborhood is a residential and industrial zone that includes average-priced buildings and some of the important factories such as Coca-Cola, Ideal, and the Azhar University.

To evacuate and remove parts of the eastern side of this district is considered a step towards developing Nasr City since this decision comes in light of removing old buildings and keeping service areas entact, and start replacing old buildings with residential towers with a modern system while maintaining the infrastructure of the zone.

Meetings with the residents of this district have been convened to understand their concerns and explain the process while highlighting the main purpose of this project is to provide the residents with properties they deserve.

Moreover, the government announced that the residents will be compensated financially and the process of developing will start effective immediately. 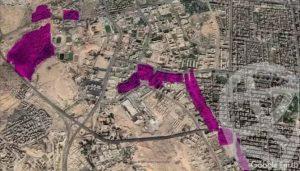 The Demolished Places in the Sixth District, Nasr City

According to the plan, the places that are to be demolished start from the Sixth District Precinct to Abou Ramy zone.

For owners and renters who are registered to the old renting law, each party will receive 50% of the compensations as all options available are catered to their needs and to avoid inflicting any financial burdens. Therefore, all the neighborhood’s and governorate units have to implement these compensations and ensure each party has received their share.

The responsible authorities announced that the development strategy of the Sixth District is being carried out by establishing residential and administrative units. Among its main priorities is to increase green spaces, in addition to a commercial mall and a craft area for workshops and others other than shops, and that the existing services, such as the police department, post office, school, and hospitals; will be maintained, because these services are required after completion of the development plan.

The development strategy only applies on all the old blocks, but as for the newly built residential towers, they remain untouched in the sixth district and part of the seventh district. Each family who resided in the Sixth District is allowed to return back to their zone after the completion of its development and they will be given a monthly rent throughout the development strategy to ensure a temporary, decent residency elsewhere until they can return back.

In the context of developing the East Cairo region, the responsible authorities have already started implementing a project to re-plan and organize this area. This plan includes linking this area to a new road network, and removing some of the slums in residential neighborhoods in the region as follows:

The Available Alternatives for Residents of the Sixth District

How Residents Can Receive Their Compensations?

Nasr City is considered as one of the most vital areas in Cairo and is close to the Fifth Settlement and the New Administrative Capital, which is why it is among the government’s top priorities to develop its infrastructure to increase its value in the real estate market and provide its residents with top-tier services.

Therefore, among the advantages of developing Nasr City is increasing its properties’ net worth in the market and increasing the number of sales after the development plan is finished.

Start searching for wide varieties of properties on Aqarmap!